In the villages of the eighties and nineties, youth and associations were inevitable. During that period when there were no major political upheavals, the village youths who came to the cities for studies started questioning the traditions from the villages till then. They did not ask for it individually, but joined together and asked for it. Beyond political parties and movements, they were fan clubs and youth clubs. Probably every village of that time had such a forum. Members of the council were involved in issues ranging from street pipes to panchayats.

Let’s recap: ‘Chinna Basanga Nanga’ is a film about the life of village youths in the 80s and 90s. Muthukkalai is a young man who returns to his village after studying in the city. With the new path shown by education, he dares to listen to the mistakes of his village. The chief of that town is Ambalam. Being a hereditary head of the village family, he takes pride in keeping the village under his control. One who makes sure that there is no confusion in that control. Muthukalai’s youth army cracks down on the control over the town.

According to the story, two women fall in love with Muthukalai. One of Muthukalai’s step-daughter died. With the goal of marrying her father-in-law, she walks around with a thali on her waist. The second girl is Ambalat’s younger daughter Buchendu. Although Ambalam’s father is Ambalam’s younger brother, Bhuchend’s mother is involved in festivals, so Ambalam murders her brother and keeps his family away.

Meanwhile, Muthukalai’s village is severely affected by the Kora storm. When Ambalat is asked to open the local temple as all the people are homeless and have no place to stay, he refuses. When Urjana, who doesn’t have the courage to object, doesn’t know what to do, Muthukkalai says he can break the temple door and enter, to which Poochend’s mother refuses, saying, “If you break it, it will be a problem. As Ambalam’s sister and wife, we also have a share in this temple. So I am going to break the lock.” She breaks the temple lock and sends people inside the temple to save them.

Ambalam summons the panchayat for violating his order and says, ‘Buchendi’s mother should be shaved, pierced with a black point and sent out of town for breaking the lock of the temple. He gives the judgment that a temple should be built for her daughter Bhuchend. Muthukalai, who opposes this verdict, asks Muthukalai to intercede for the victims as his mother-in-law, Muthukalai takes the thali from the dead woman’s waist and ties it to a bouquet and makes her his wife and creates a new relationship. Ambalam, who killed his brother for wrongful marriage, what did he do to his daughter? What happened to Muthukalai’s village revolutions is the rest of the story.

Bhawalar Varadarajan Forum: Muthukkalai, who is investigating the crimes of the village, did not do it alone. He will do that by bringing the youth together and forming a forum. The name of their forum is “Pavalar Varadarajan Forum”. In the eighties and nineties, musician Ilayaraja had a great impact on the youth through his music. Like film actors, he had a huge fan base beyond that. They also had great respect for Ilayaraja’s brother Bhavalar. In order to express it, Muthukkalai will keep the name of Bawalar for his forum. 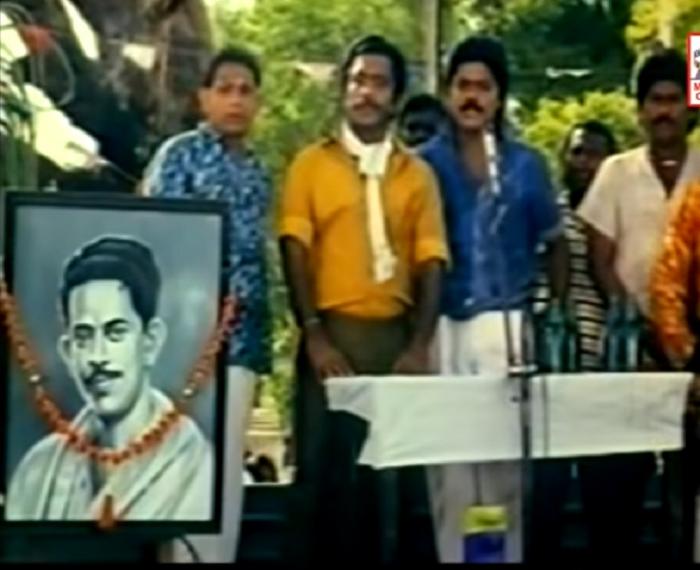 Well, the film’s director Raj Kapoor would have explained what the forum did in the village through the introduction song of the forum. On the opening day of the forum, the villagers would ask, “What are you going to do when the forum is started in Pattikatula?” and they would list their needs like this… “There is no water pump in our street… There is no light in our street, there is no nurse-A in the local hospital… It has been 4 months since we got married and we have a child. Illappa…” will express their complaints. Although this scene looked like a joke to the outsider, the village of that day believed that the educated youth would have a solution to their basic problems. The youth councils of the day fulfilled that hope.

Culture of the Gathering: In the villages of those days there was a hut. In some places, the booths are called Ambalam and Vasaka Road, and it is in this booth, which is a village building, that the chat concert of the village elders takes place during non-working hours. If there were booths for the elders of the village to sit and talk, there were youth forums for the chat concert of the youth. In the forum you can see young people who do not stay at home when they are not working. To such an extent these forums were mixed in the life of the youth of that day.

Similarly, the members of the association were not only of similar age. There were many people in the villages who had no one to marry them, those who had passed the marriageable age due to circumstances, and those who got married after attaining the marriageable age, all these youth councils accommodated all of them. That fact would have been rightly reported by Bhavalar Varadarajan Forum. The members of the forum will be Murali, Charlie, Kingang, Kumarimuthu, an anxious youth.

Village Dispersions: A scene in the film shows that the youth of those days focused on local issues. At the same time the scene also records the village’s distinctive culture of raining chore (begging for rice in the village). Why, it is a folk belief that if the people of the village come together and collect raindrops when it has not rained for a long time, nature will relent and make it rain. In some villages it is performed as a ritual burning of Kodumbavi. That is to say, they make a human figure (todum pavi) in straw and take it in a procession to claim that it is not raining because of the tomu pavi in ​​the town and perform death rites for it. In the film, in the village of Muthukalai, when it has not rained for a long time, the youth of the council,

“Heavenly King
Rain-falling saint
All the people of Chola are coming to Soth…” is sung.

The lay people believed that when Urchoru was taken, all its people had reached the point where they might even turn to porridge, and nature would relent and make it rain.

Next, we can mention the scene of the bouquet blooming and the scene of her going home after her marriage with Muthukalai as records specific to the village. In the first Naadala after the bouquet has reached maturity, the speech scene beginning with “Indadiyamma first thanni… Thaimaman matal thanni” and the verses uttered when the bouquet is given home cannot be passed off as mere ritualistic chants.

Ilayaraja: The music for the film is Ilayaraja. This film came at a time when he was flying high in the music world. It is said that the film scheduled with Ilayaraja, Murali and Revathi’s dates got stopped due to some reason and Raj Kapoor got an opportunity to direct the film without wasting the dates. The director, who had used the opportunity properly, would have picked the right story and given a big hit. However, after that he could not take a film to name a few. The music played a big role in making the film complete with all that Patti Tanki. The song ‘Velaku Vacha’ sung by Malaysia Vasudevan, ‘Enna Manamulla Ponnunnu’ in Janaki’s voice is still an all-time favorite of the youth of those days. 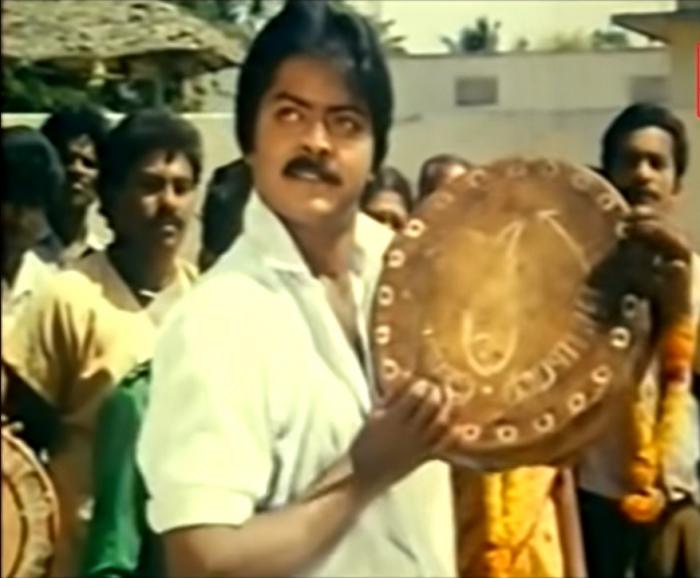 Similarly, the scene where Muthukkalai, who marries his friend against caste, announces his arrival against Ambala through parayisa is a testimony to Ilayaraja’s background music revolution. Muthukalai, who breaks the rule of not playing drums in the street where Ambalam’s house is located, announces the revolution by drumming his friend’s wedding procession. Ilayaraja would have composed the music for that scene using only a single drum. The music of the scene would have been recorded as a voice against oppression.

Fact and Fiction: The great tragedy of timelessness is the great tragedy of Tamil cinema, which started speaking against the local politics and the caste and class inequalities prevailing in the village in the eighties, and within a decade, it started to hold them as the unique culture of the village. When Muthukalai, who questions Ambalam’s caste untouchability, is convicted of murder and allowed to be a prisoner and comes to the temple festival as the next Ambalam to receive village honor, Muthukalai Muthukalai accepts it without stopping the villagers from tying the cloth around his waist. It is no exaggeration to say that the film ‘Chinna Pasanga Nanga’, released in 1992 as director Raj Kapoor’s second film, paved the way for the journey of Tamil cinema in the 90s. 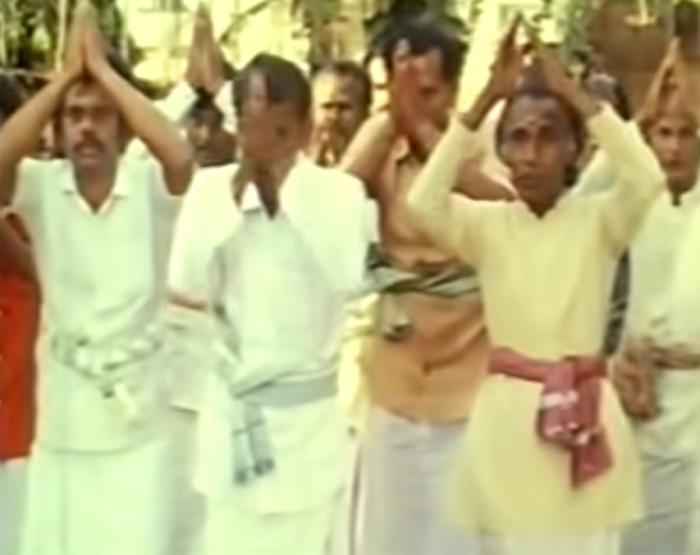 Postscript: Villages are not just lush greenery or dry earth bursting with stones. A village encompasses within itself various micro-cultural elements. The aim of ‘Sinemapuram’ series is to explore them through Tamil cinema. So the articles only talk about the plot of the movie. But it is one thing that everyone knows that Ilayaraja cannot be avoided when talking about eighties cinema! I failed to write about the music of ‘Chinnathaai’ in the previous episode, ‘What is the light for the lamp on the hill?’ It is a fact that we cannot talk about rural cinema without the music of Ilayaraja.

> Previous Chapter: Cinemapuram – 1 | Chinnathayi – the story of the woman who convinced us to question God!