Actor Kamal Haasan, who has been admitted to a private hospital due to fever, will return home in a couple of days, according to a hospital report.

Actor and Makkal Neeti Maiyam Party leader Kamal Haasan was admitted to Borur Ramachandra Hospital in Chennai last evening. Reports surfaced that he was admitted for a routine check-up.

In this case, an official report has been released from the hospital. In the statement, ‘Actor Kamal Haasan was admitted to the hospital for treatment yesterday (23.11.2022) with mild fever, cold and cough. It is reported that he is recovering well and will return home in a couple of days. 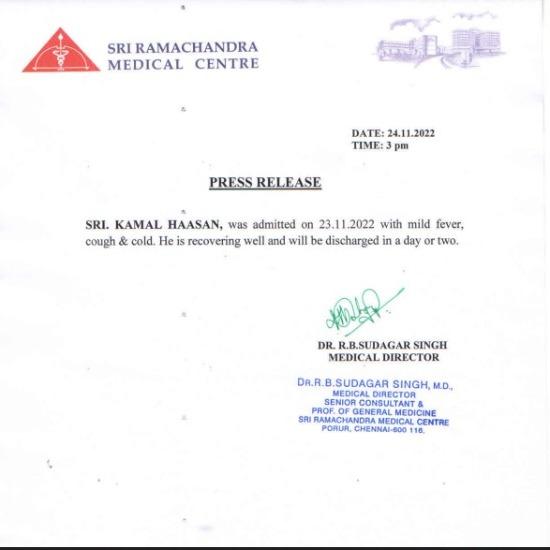 Earlier, actor Kamal Haasan returned to Chennai yesterday after participating in some programs in Hyderabad.

‘Beyond the moon’ – NASA’s Artemis rocket flew into space

Music with Ilayaraja 19 | ‘Medti Oli Katodum…’ – A visible wound will heal by touching it!

Manju Warrier who sang for ‘Thunivu’ – Sharing with Resilience