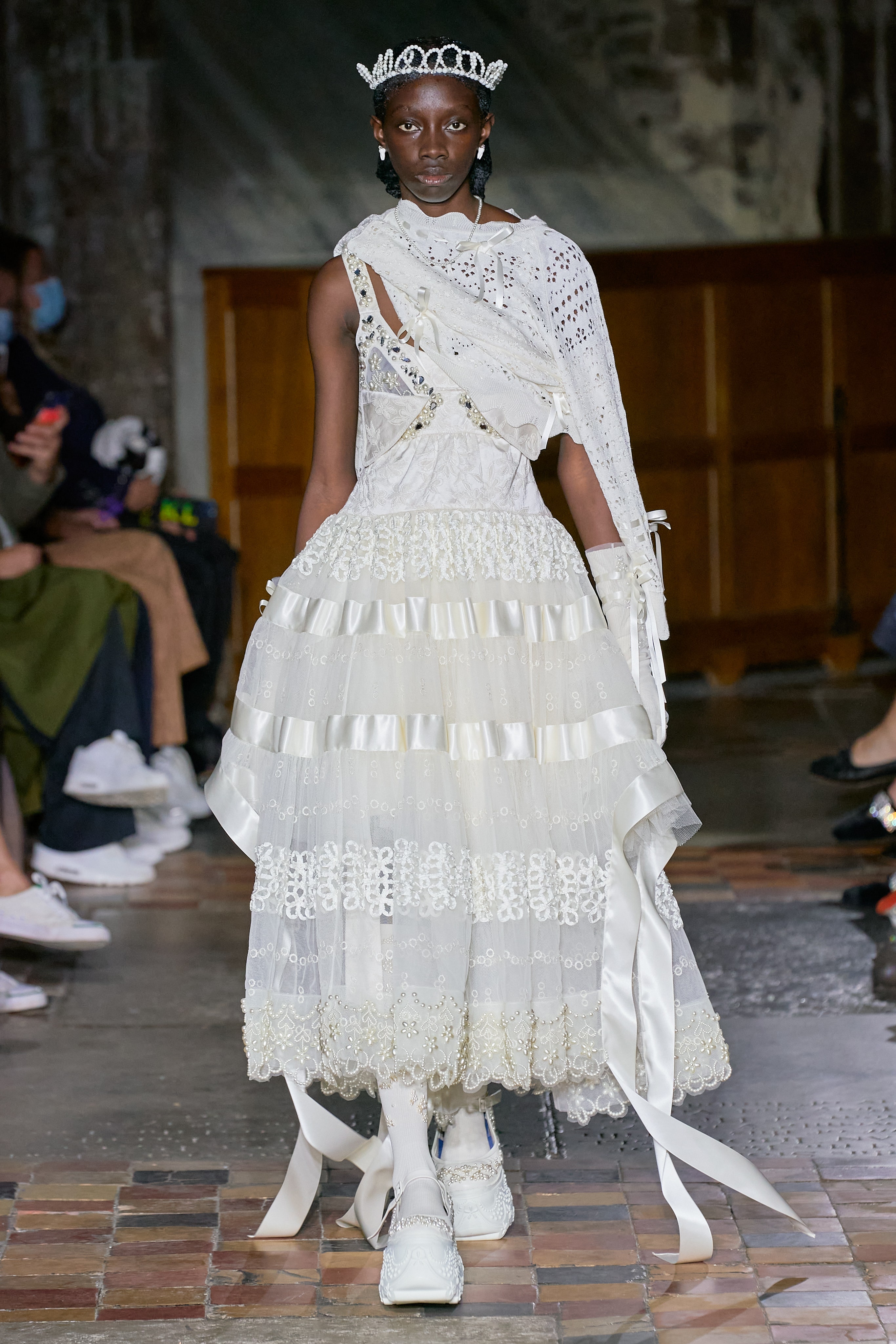 Simone Rocha gathered us at the medieval church of St Bartholomew the Great in the City of London to attend a processional show spun from the rituals and reality of bringing a baby into into the world. New life, new beginnings, tenderness—it seemed like a touching metaphor for the reunion of people at physical shows in London for the first time since February 2020.

Out of the darkness of the ancient setting came Rocha’s women, dressed in layers of white broderie anglaise, lace and tulle. Their shoulders were swathed in christening shawls, their voluminous skirts trailed satin ribbons and their heads were crowned with pearls. “A lot of this obviously came from a very maternal place,” said Rocha. She has recently given birth to her second daughter, Noah Roses, a sister for five-year old Valentine, who sat in one of the front pews between her maternal grandparents Odette and John and delighted in every split second of her mother’s show.

The sense of occasion motivated Rocha to concentrate a super-sensual sensory overload of detail into her clothes. “I wanted there to be a lot of texture, because it’s an in-person show, and everyone will be quite close to the garments for the first time,” she explained at a preview in her studio. “I was looking a lot into the way children interpret and wear clothes, but then also birth, the ceremony of christening and communion gowns. And baby pointelle knits, the ribbon threaded through the eyelets. And mohair baby cardigans. And Swaddling. And…”—she laughed—“at the out-of-control body dislocation that going through the whole process causes…”

Among the post-natally inspired details were nursing bras—some of them inset with jewels—and the idea of bedclothes and nighties becoming fused. “So there’s kind of a funny, deranged negligee night-time sort of spooky, deranged insomnia theme running through, too,” said Rocha. Every new mother will relate to what she’s talking about. It might be the first time that post-natal sleep-deprivation and the demands of night feeds have been the inspiration behind a collection.

Rocha ended up making lovely coats out of fabrics that looked like antique eiderdowns, one in lavender, another in rose-bud strewn brocade. Gigantic white cotton collars with scalloped edges seemed like bedlinen and ecclesiastical altar-cloths or surplices all at the same time. “I also made a lot of dresses which open at the front and back, which you do need when you’re nursing,” she remarked. “I wanted to support the breasts with corseting, and to release the hips.”

The red and black vinyl jackets and laced-up boots represented something darker about giving birth. Among the baby-proportioned tutus were a couple of red geometric bags “shaped like drips of blood.”

In all, Simone Rocha didn’t miss a beat during lockdown. In the long-awaited event her “come-back” collection was superbly herself—and maybe even more so, if that’s possible. It certainly appeared that way to a fashion audience that had been sensorily and visually denied the euphoric pleasure of seeing clothes before our naked eyes. Everyone was smiling as they emerged, blinking, out of church into the autumn sunshine. 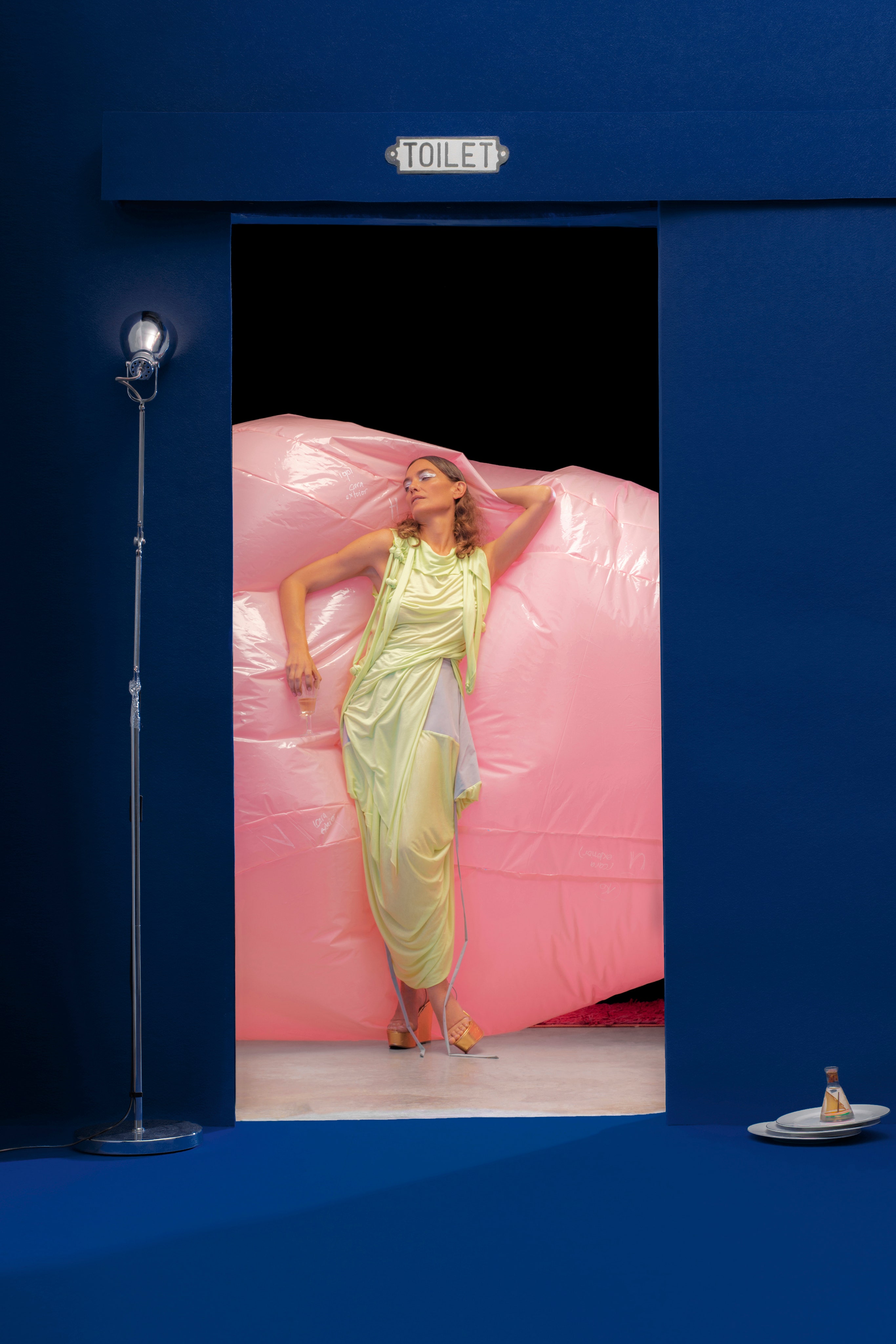