This is a game bot written for Lumberjack game at Telegram platform. It is developed by using python3, image processing(OpenCV and NumPy) libraries, and GUI interaction libraries(several libraries are tested). I enjoyed coding this bot and I want to share the code.

I was in a competition with a friend in this game and I realized that I can create a bot and get the highest score easily. The initial approach was using image processing and figuring out the left-right moves. I moved with this idea and implemented it.

I picked PyAutoGui library for UI and keyboard interaction at the beginning, but unfortunately, it was slow. Taking a screenshot of a given region and hitting a key usually took more than 100 milliseconds, and the bot was not able to score more than 150 pts. But after changing keyboard interaction and screenshot libraries, it was enough to make more than 900 points. After some adjustments, I was able to get 1000 points.

The bot is designed to solve the game through UI interactions (image processing and keyboard interaction). The first part was detecting correct moves using image processing, edge detection then applying template matching on grayscale images. Calculating the next moves is straightforward after the template matching. If the tree is on the right side then press the left button twice and vice versa.

I coded this code for macOS. After several modifications, it can be run on other operating systems. 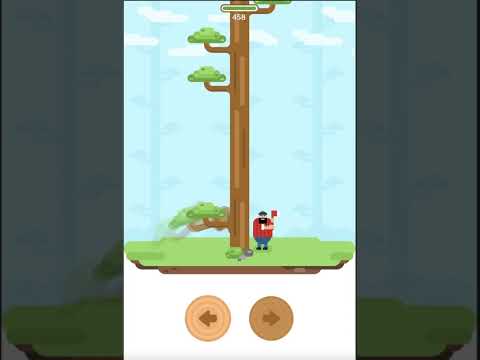 I hope you enjoy that bot, you may use it to get the highest score against your friends or you can challenge yourself and improve the performance, and score more than 1010(the highest score I get).