Who doesn’t want a dark theme on their website! Not only does it help us focus better, but also keeps our eyes safer 🤓.

Spin up a new React Project ✨

You could use your local development environment or maybe use a sandbox.

Also, I will be using class based components for this one – not using React Hooks.

In our App(), just return a div for the time being. (Can use a button as well)

Add state to our app

We cannot do much with a dumb component when it comes to embedding logic inside of it. So we need to add state to the React component.

Add a state called isDarkThemeEnabled to the App component and set it to false. 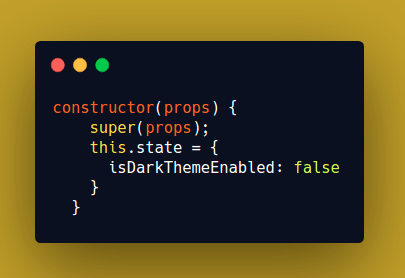 This is the crux of the entire problem.

How to build the theme switcher / toggler ?

This might become simple, if you try to draw an analogy to a light bulb. A light bulb has two states on and off.
At any given point of time it is in one of the either states.

Now, imagine the theme switcher to be a bulb and try to map the idea.

You got it! 🎉 If the theme switcher is imagined to be a light bulb, light mode becomes on and dark mode becomes off or vice-versa.

Now, how to toggle the state ? Pretty simple, just flip the current state whenever a certain event fires.
In simpler terms – on clicking a button change the state value from true to false or vice versa.

Now, as we have designed the approach it’s good time to start coding up the idea.
FYI for changing state in React we use the setState function. You can read about the setState API from here.

Let’s create a clickHandler and embed the state-toggler logic inside of it. 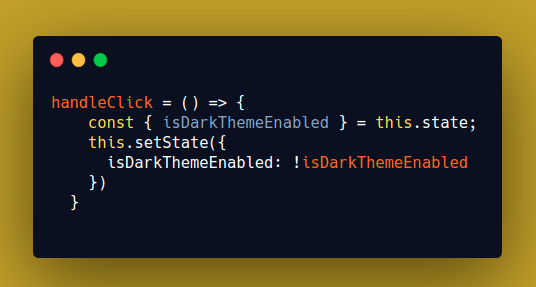 Pass this clickHandler to the onClick prop of the div, to trigger the function whenever user clicks on the div.

Adding SVG to our app

I want to let the user know which mode he can currently switch to. Can be accomplished with text, but what better than using SVG icons to enhance the UI !🎉

I will be using heroicons for high quality SVG icons.

Create two files in your /src directory, for two SVG icons for the two states. I will be using a Moon and a Sun SVG in this case. 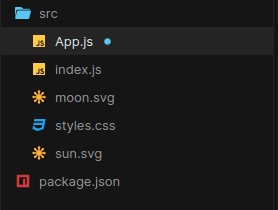 To use any SVG in our React app, we can directly use them in our code or import the SVG as a React Component. I prefer the latter as it helps to keep the code cleaner.

We need to toggle the SVG icons as well to suit our purpose. For this we will use conditional rendering.
This is a gem 💎. You can read about this here.

The idea is, whenever isDarkThemeEnabled is true we need the sun SVG to show up else the moon SVG should show up. 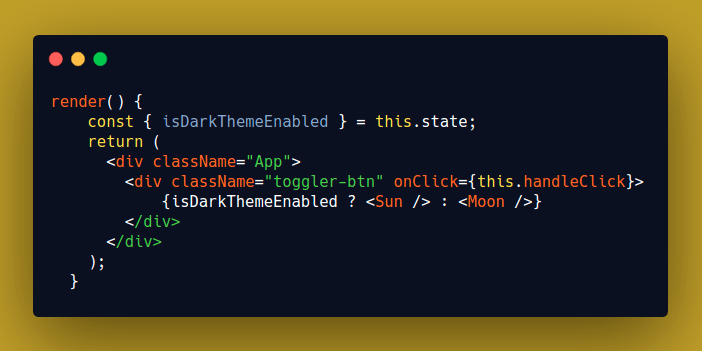 This is how the app looks right now. You’re almost there.🏁

Let’s style up our app

When dark mode is enabled we would want to paint our app background dark. So, for this we would prefer applying classNames conditionally.
You can read on this from here.

We would be using JSX expression and Template Literals for this. When isDarkThemeEnabled is set to true, which means dark mode is enabled, we would append a className to the App className.

Now lets add some style for the .App.dark-mode class. 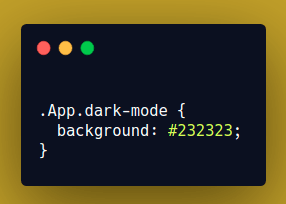 Let’s also style up the SVG icons 💅. Add a className of moon and sun to <Moon /> and <Sun /> components respectively.

This is how the App code looks right now.

Add desired styles in the styles.css. 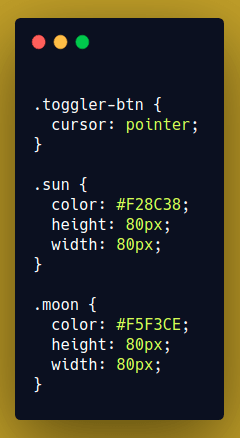 ✨ Add a transition time to the wrapper class to make the color switch smoother. I added transition: 0.3s ease to .App.

This is how the App looks finally!
Note – I have added some additional styles and animations.

For a larger websites use css variables to make painting UI components on theme toggle easier.

Feel free to play around with the sandbox.

Congratulations!! 🎉🎉 You made it till the end. If you’re still here chances are you probably liked the blog.

You can also make improvisations to this simple project and share them. This would help in getting the fundamentals stronger 🏋 🚀.

Do let me know how you liked the blog and where I need to improve. Would be eagerly waiting for feedback!